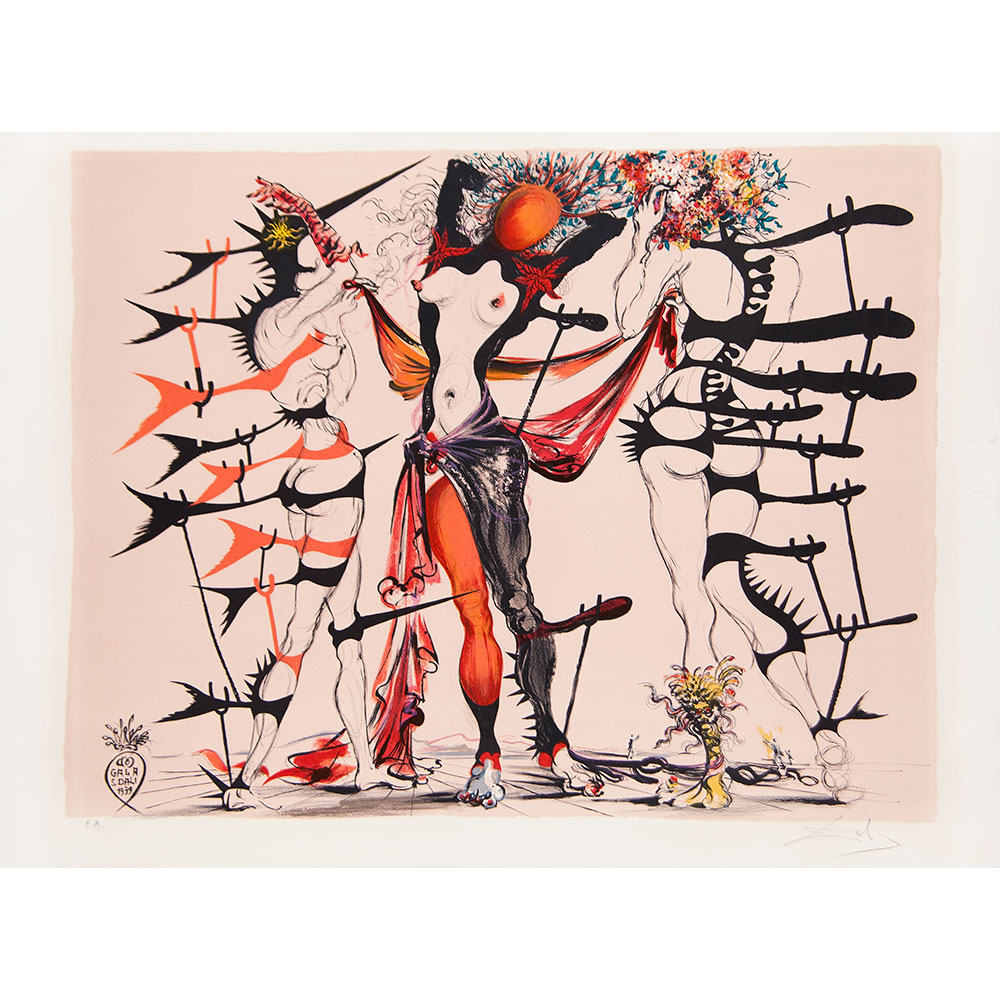 Mention Salvador Dali and his irrepressible melting clocks spring immediately to mind. Dali the painter, as well as Dali the showman, is doubtlessly what most people think of when the artist’s name is mentioned. The man whose flamboyance was as prominent as his iconic images of the 20th century: burning giraffes and floating Madonna’s and impossibly limbed elephants and, of course, those soft-as-Camembert time pieces, oozing down the sides of ledges and tree branches and in many other settings – real or imagined.

But Dali had an extraordinary career as a set and costume designer of some remarkable ballets and other theatrical productions, too. And here, in this magnificent lithograph, Tristan Fou Costumes (Mad Tristan), we see an example of Dali’s inimitable surrealist vision as it informs a most unusual costume design.

Dali, in 1937, contracted with Leonide Massine of the Ballet Russe de Monte Carlo to produce Tristan Fou. Costumes were to be produced by Elsa Schiaparelli. The story was loosely based on the life of mad King Ludwig II of Bavaria – a blend of myth, fantasy, and reality.

The lithe and sinewy women feature four distinctly Daliesque touches that make them unmistakably the products of the Catalan painter’s vivid imagination. The heads of roses recall several paintings and sculptures by Dali that used this device to add a surrealist twist that exploits the symbolism of roses as representing the female sex. The nine fish tails strapped onto the body of the woman at left, supported by crutches, not only provide a visual incongruity, but nod to Dali’s interpretation of fish as a phallic symbol. This fact is dramatically illustrated in a drawing in the Dali Museum collection in St. Petersburg, Florida, where an exaggerated phallus is simultaneously and clearly also a fish. This fish motif was seen in various other works by Salvador Dali, most notably his 1941 oil painting, Costume for a Nude with a Codfish Tail.

The crutches – possibly the most ubiquitous of all of Dali’s personal images, even considering the famed soft watches – have been widely interpreted in two plausible ways: Dali’s comment on the weakness, frailty and degeneration of society in general – but also as a kind of sublimated allusion to his own alleged impotence. This latter explanation may be most significant, considering how Dali made unabashed declarations that eroticism was among the top driving forces in his remarkable life and work. Even if, in Dali’s case, it may have been more voyeuristic in its manifestation.

Finally, of course, we consider the outrageously peculiar appendages jutting from the middle figure and the woman at right in Tristan Fou Costumes. Once again, the phallic symbolism cannot be lost on even the most minimally discerning observer. It may also be a reference to at least one resident of Cadaques, Spain, when Dali was a young man, whose hydrocephalic deformity made an indelible impression on the young artist. The same sort of paradoxical elongation is seen, for example, in Dali’s 1932 canvas, The Average Fine and Invisible Harp, and, among others, in Meditation on the Harp, 1932-1934. What’s more, a similarly looking figure was depicted in the lower right of Dali’s 1945 painting, Napoleon’s Nose, Transformed into a Pregnant Woman, St rolling H is Shadows with Melancholia Among Original Ruins.

An examination of this lithograph would be incomplete if one didn’t also draw parallels between it and the costumes Dali created for his infamous Dream of Venus pavilion at the 1939 World’s Fair, in which the scantily clad women in that spectacle sported similar fish-themed regalia.

It may be an understatement to say that “Dali was different,” but indeed, a lithograph such as Tristan Fou Costumes immediately telegraphs to the viewer a distinctive difference that makes Salvador Dali’s work as eye-opening as it is memorable. A true kind of persistence of memory, because – as Gala famously said of Dali’s soft watches, when she first saw them in his career-defining 1931 masterpiece, “Once someone sees them, they will never forget them.” The same might apply to this dramatic lithograph, Tristan Fou Costumes – so different in content and execution, and so improbable for anyone to forget. That must surely be one of the great gifts of Surrealism – a movement whose powerful visual force has continued to have such lasting and memorable effects.