The Crucible of the Philosopher, 1977

The Crucible of the Philosopher 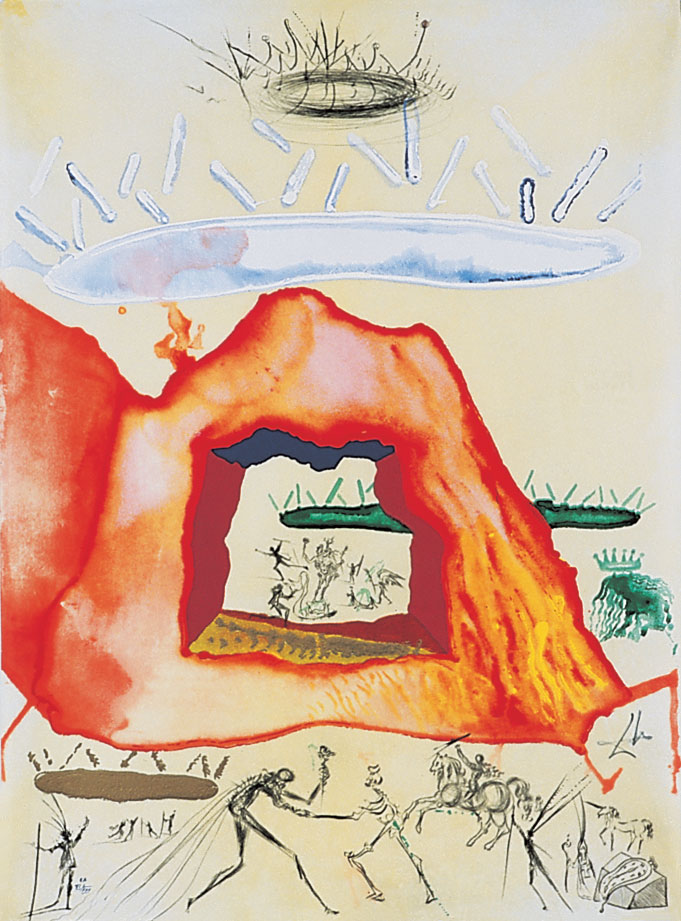 (Mr. Chimera worked directly with Dali Museum founder Reynolds Morse, as the publicity director of the original Dali Museum when it was located in Beachwood, Ohio)

As if often the case with an artist as complex and mysterious as Dali, we are sometimes left with more questions than answers. “The Crucible of the Philosopher” is one of 10 prints from the extraordinary “Alchemy of the Philosophers” suite, on which Dali worked for four years, and which synthesizes multiple creative techniques and mediums.

Alchemy was an ideal phenomenon from which Dali would draw inspiration, and to which Dali’s vivid imagination and quest for creative expression would be drawn. Since antiquity, alchemy’s early practitioners claimed profound powers, most notably aligned with their objective of turning base metals into silver and gold. No serious study of mythology, religion and spirituality could ensue without consideration of the influential philosophical tradition of alchemy.

In “The Crucible of the Philosopher,” the bold red structure, seemingly ablaze, may well represent the furnace for heating substances – metals, in this case, in an effort to transform them into gold. In fact, is that what Dali was showing us here? The elongated form in white at the top, and then green in the middle distance, may have been transmuted, in the lower left foreground, now appearing in gold.

Along the bottom and in the middle distance, a mélange of images appear: frolicking people and winged angels; a horse and rider; a unicorn; even an iconic Dali soft watch. It all suggests a powerfully positive mood, perhaps a metaphor for what alchemists hoped to achieve: unraveling mysteries to attain a greater level of human comprehension.

The concept of alchemy seems to accord more logically with Salvador Dali’s intentions than one might first imagine. Consider, after all, that the alchemists were about experimentation. That is precisely what Dali was about. He endeavored to in effect transform the world around him, lending his creativity and surrealist twists to just about everything: a common time piece becomes a soft iconic symbol; a series of unrelated objects – scissors, trombone, drum – comprise a bizarre surrealist sculpture; the structure of atomic particles represent the blueprint for an entire artistic period Dali called Nuclear-Mysticism.

Perhaps what sums up the appeal of “The Crucible of the Philosopher” is that Salvador Dali was – for all intents and purposes – a modern-day alchemist himself! He synthesized, transformed, re-imagined and created a new way of thinking and seeing – a world through the lens of a true surrealist, in thought as well as in deed.

Perhaps. After all, with a genius as formidable as Dali, the questions outnumber the answers. And maybe this is how it should be. After all, even Dali asked, “How do you expect the public to understand the meaning of the mages I transcribe when I myself, who am the one who makes them happen, I don’t understand them, either?”