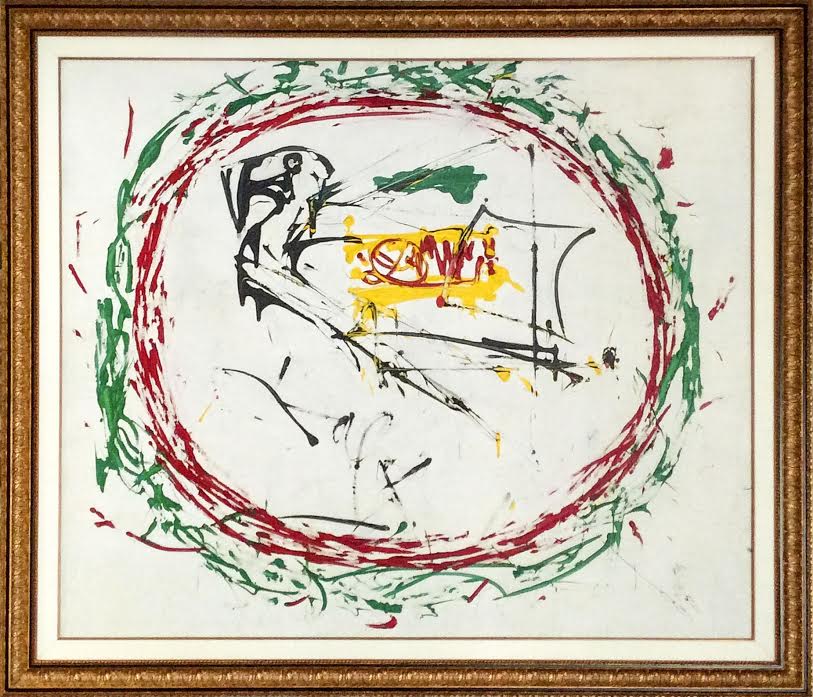 An original painting by Salvador Dali

‘One doesn’t discover new lands without consenting to lose sight, for a very long time, of the shore.’

When Spanish explorer Vital Alsar (b. 1933) stepped on the beach in Ballina, New South Wales, Australia on November 21, 1973, he and his crew made history. Travelling with a twelve-sailor international crew hailing from the United States, Canada, México, Chile, Ecuador, and France, Alsar’s ‘Las Balsas’ (Spanish for ‘rafts’) expedition had been navigating the Pacific Ocean since May 27 – just a few days short of six months. Aboard three rudimentary, hand-made wooden vessels, they had traversed approximately 9,000 miles from Ecuador to Australia; it remains the longest recorded raft trip in history. And curiously, aboard one of the rafts, was a painting by the world’s most famous Surrealist artist, Salvador Dalí. The story of how Dalí came to paint Las Balsas and become a part of this historic achievement is as entertaining as it is remarkable.

The Las Balsas expedition was the third of three trans-Pacific voyages Vital Alsar led between 1966 and 1973. Setting sail from Ecuador to Australia, Alsar sought to prove that migrations from South America could have reached the Pacific Islands centuries before the Spanish Conquistadors. His first effort, called ‘La Pacifica,’ failed in 1966 when the raft sank after 143 days at sea. His second attempt, ‘La Balsa,’ embarked on May 29, 1970 from Guayaquil, Ecuador with a crew of four (including Alsar) and successfully arrived in Mooloolaba, Australia 160 days and 8,600 miles later. It was, at the time, the longest recorded raft voyage in history. Despite this astounding success, however, many deemed ‘La Balsa’ a fluke. Alsar conceived his third voyage, then, as a three-raft expedition (hence the plural, ‘Las Balsas’) to demonstrate that the previous ‘La Balsa’ journey was not an isolated stroke of luck and that, indeed, hundreds if not thousands of South Americans could have skillfully maneuvered the ocean waters to the distant South Pacific.

The three Las Balsas rafts, christened the Guayaquil, the Mooloolaba, and the Aztlán, were based on designs used by South American indigenous peoples prior to the arrival of Spanish explorers in 1526. Each raft measured 46’ x 18’ and was entirely built by the twelve-man crew by-hand using wood, ropes, and wooden pegs.[1] Although buoyant, the rafts could not be turned when carried by the ocean currents. Each raft had a supply of food and water, but only enough for a few weeks. For much of the journey, the crew would have to collect rain water and rely on freshly caught fish. Each raft also was equipped with short range radio that enabled the crew to contact land every third day.

According to Robert Descharnes, one of the Las Balsas sailors – possibly the Mexican, Jorge Ramirez – telephoned Dalí at his home in Port Lligat, Spain in early 1973 to ask if he would execute a painting for the crew to use as their sail for this heroic journey.[2] According to some reports, the crew hoped to be able to barter the painting in the event of an emergency.[3] Due to some confusion, it was the middle of the night in Spain when the telephone rang, and Dalí awoke to take the call. ‘Everyone else in the world has seen your paintings,’ the sailors told Dalí, ‘but not the dolphins, whales or seagulls.’[4] Dalí asked sleepily how much they would pay him. The answer – ‘Nothing.’ – threw the artist into a tirade. Dalí shouted that they had some ‘cojones’ calling him in the middle of the night for a free painting… and yet he admired their guts: he agreed to do it.

The painting, unofficially titled Las Balsas, measures an impressive 57 ¼” x 68” and depicts a bird with a large curved beak rendered in a wild, expressionistic style typical of Dalí’s work of the late 1960s and early 1970s. The bird is surrounded by aggressively painted rings in black/very dark green and red. Given both Dalí’s and Alsar’s Spanish nationality, it is likely that Dalí intended the black, red, and yellow color-scheme to invoke the national flag of Spain, which in 1973 consisted of horizontal bars of red and yellow set behind the black eagle of Saint John the Evangelist; the eagle remained part of the Spanish flag from 1938 until 1981. In most press photographs of the Las Balsas expedition, the sail is not Dalí’s but rather one Alsar designed himself depicting three small ships enclosed in circles and positioned together within a larger circle. The sail Dalí painted was hoisted only rarely in order to keep it safe during the six-month journey. Had Dalí’s painting been used regularly as a sail, it no doubt would have disintegrated over the course of the 179 days of storms, winds, and tumultuous waves.

As an interesting aside, Dalí’s agreement to paint on a canvas sail had a long historical precedent in the history of painting. Although ‘oil on canvas’ is now a common medium, the use of canvas as a painting support first arose in 16th-century Venice, where humidity precluded the then-standard use of wooden panels as supports for painting. As a shipping capital, Venice boasted a large supply of loose canvas used for boat sails, and Venetian Renaissance painters adopted these canvases (intended for sails) stretched on wooden frames for their oil paintings. This quickly became the standard support, as it remains today. I do not mean to suggest that this history was significant to Dalí in 1973 but rather to simply observe that his act of painting on a canvas sail could be placed within a larger art historical tradition.

About five miles from the Australian shore, the Las Balsas crew accepted a tow from the HMAS Labuan, part of the Royal Australian Navy. A storm hit, and the crew of the Guayaquil was brought aboard the Navy ship and the raft was set free. The Mooloolaba and Aztlán made it successfully to Bellina, though the boats soon began to break apart. The Mooloolaba was beyond repair, while the Aztlán was secured and eventually installed in the Maritime Museum in Ballina, where it is still visited by thousands each year. The Dalí painting, meanwhile, was said to have been traded to one Laurie Wood, then-owner of the Suntori Motel in Bellina, in exchange for the crew’s room and board.[5] The painting was held discreetly in a private collection in Australia until the early part of the 21st century.

Before setting off for Australia in 1973, Alsar explained to the press about why the Las Balsas expedition was so important:

If you want to do something extraordinary, something different, you must put all your heart into it. I am not afraid of critics or people who say that what I am doing is impossible. We are doing something that everyone would like to do. That is the biggest satisfaction in the world. To have an idea and turn it into reality.[6]

It was no doubt this readiness to achieve the impossible, to defy the odds and turn one’s dreams into reality that struck Dalí when he agreed to donate gratis the Las Balsas painting. Indeed, Las Balsas is an inspirational work; having travelled a record-setting 9,000 miles, it is a salute to courage, perseverance, and achievement – Alsar’s, but by extension that of humankind; quoting Alsar, ‘To have an idea and turn it into reality.’

Dr. Elliott H. King is an Assistant Professor of Art History at Washington and Lee University and a leading specialist in the art and writing of Salvador Dalí. Dr. King has lectured and published widely on Dalí in addition to serving on the curatorial committees for many of the most important Dalí exhibitions of the past decade, including the critically acclaimed exhibition Dalí: The Late Work at the High Museum of Art in Atlanta, Georgia (catalogue published by Yale University Press, 2010).